Wednesday Blog Hop: Do you believe in folk tales?

It has been far too many weeks since the last time I posted anything for the Wednesday Blog Hop, I'm utterly disgusted with myself.

For anyone who needs a reminder of the format, this blog hop involves one picture and five random words, all of which have to be included in some way in a short piece of no more than 500 words.  There is a week to post your contribution and link it up to Chasing Revery, one of our lovely hosts for this weekly event.

This weeks prompts are: 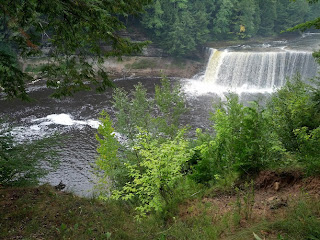 And here is my contribution this week:

Do you believe in folk tales?

Terri crouched down behind the bushes to keep out of sight, she didn't want them to know she was here. She'd had to wait all week to come back, the weather had kept her away with its continual wind and rain. She peered down into the pool below, the noise from the waterfall filling her ears. There was no sign of anyone yet, but she was patient, she could wait.
She'd heard all the tales of this place since she was in high school, but had thought them nothing but folk stories. That was until the night her and Steve had come this way, looking for a good spot. All the usual places to go had become much too crowded for them these days so they'd had to seek out there own space. It was purely by accident that they'd found their way here. She could still feel the lump on the back of her head from where she'd fallen half way down the hill.
Steve had come racing down after her like some sort of sprinter to see if she was alright and they'd both been stunned to see the reaction from the water. They'd seen nothing until that point, when three huge splashes were heard and three dark figures disappeared under the waterfall.
Ever since then Terri had been captivated by what they'd seen, or thought they'd seen anyway, and was determined to find out what they were.
After a few visits after hours she knew that they would mostly come out at night, and would sit quietly in her hiding place and just watch them. Her friends never knew where she was, they were more interested in hanging out at the cemetery, trying to decide what the occupants had done in a previous life. She was more fascinated by this other world that was thought non-existent.
She brought her flask of tea and her homemade muffins made from her nanna's recipe, and tried every now and then to get a bit closer.
One night she'd left a muffin out on a rock to see if it would attract interest. The only interest there was came in the return of the muffin sailing through the air in her direction. She was pretty sure she knew they were watching.
It had been too long since her last visit and she'd worried they'd moved on, but she didn't have long to wait to be assured of their presence again. They were all out tonight to bask in the fresh evening air, the first night without rain for five days.
Tonight Terri had moved a bit further down towards the waters edge, the closest that she'd ever dare go. She was so intent on watching across the water she didn't even notice the figure watching her from nearby.