It has been two weeks now since I wrote anything for the Wednesday Blog Hop, and I came close to not managing this one either.  I've been quite frustrated with myself for this slip so have resolved to make it this time before a new prompt tomorrow.

As usual, there is picture prompt and five words to be included, along with the 500 word limit.  For more details on this great weekly blog hop check out either Chasing Revery or The World of My Imagination , our wonderful hosts for this little party.

The prompts this week are: 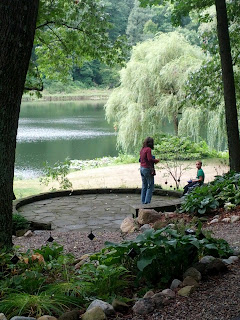 So, without further ado I present:

The Sweetest of News

The breeze coming off the lake felt cool against my skin as I descended down the path. The sun reflected off the water and would have dazzled me if not for my sunglasses. I reached our spot and relaxed in the shade, waiting for him to arrive. Sitting on the wall next to the lake I could almost reach out and touch it. Beneath the ripples I watched as the fish darted around, this way and that, totally oblivious to the world looming above them. Now and again a fin would skim the ceiling of their haven, but soon disappeared again amongst the depths.
I glanced up as I heard Jake coming down the path. He ambled towards me in his favourite navy t-shirt and baggy trousers. He never wore shorts, even in the hottest of weather. He didn't want to submit anyone to the sight of his skinny legs, 'They're too much like toothpicks for my taste,' he would always say.
I stood as he came near and he drew me into a huge bear hug, kissing my hair tenderly. 'You look lovely,' he said as he pulled away again. 'I've been worried about you all day, your message this morning was pretty cryptic,' he said as we sat down together. His hands held mine as he stared into my eyes, trying to fathom why I asked him here now, to this spot.
'I know, I'm sorry. I didn't mean to worry you but it's not something we can talk about via email or phones.' I had to break his gaze as I began speaking. I couldn't bear to look at him, fearing the reaction I was certain would come.
'Hey, what's got you so worried? Everything's alright isn't it?' He tilted my chin towards him so I couldn't help but look straight at him. Now he was here I came straight to the point before my courage left altogether.
'I'm pregnant.'
The next few minutes seemed to stretch out into infinity, terror spreading across my heart like a creeper. It was all I could do to keep myself upright. I didn't know what else to say so I had to sit and wait for a reaction.
When it came it wasn't at all what I expected. A grin had started to spread across his face, continuing to his eyes until his whole face was lit up with joy. 'Really? That's fantastic!' He put his arms around me as I tried to make sense of it. 'Are you pleased?' he asked.
'Well, I think so.'
'You look terrified.'
'I thought you'd be horrified, given how much you detest your brother's children.'
'Yeah, but they don't have us for parents. Promise me something now though.'
'What's that?'
'You'll start taking your vitamins properly,' his stern look didn't last for long before he started grinning again.